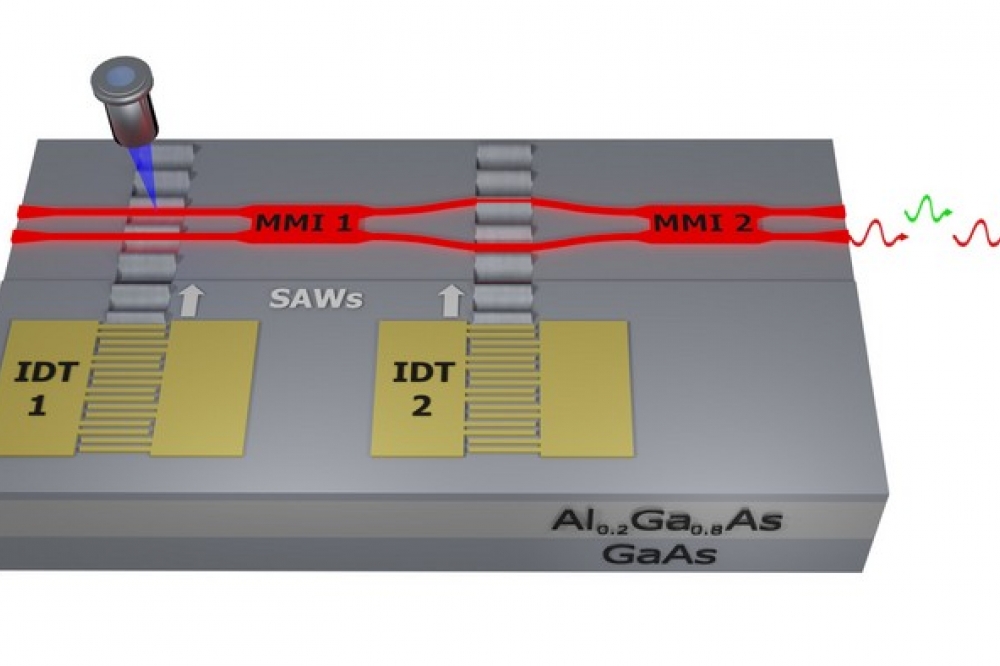 A team of German and Spanish researchers from Valencia, Münster, Augsburg, Berlin and Munich has succeeded in controlling individual light quanta to high precision using a soundwave.

In their Nature Communications paper 'On-chip generation and dynamic piezo-optomechanical rotation of single photons', the researchers report how they switch individual photons on a chip back and forth between two outputs at gigahertz frequencies. This method, they think, can be used for acoustic quantum technologies or complex integrated photonic networks.

The researchers fabricated a chip equipped with tiny waveguides and quantum dot light sources. Matthias Weiß from the University of Münster carried out the optical experiments and adds: “These quantum dots, just a few nanometers in size, are islands inside the waveguides which emit light as individual photons. The quantum dots are included in our chip and so we don’t have to use complicated methods to generate individual photons by means of another source.”

The picture above shows how a focused laserbeam (left, blue) generates single photos by a single quantum dot inside the photonic waveguides (red), which are fabricated on top of crystalline GaAs- Al0.2Ga0.8As.Two interdigitating electrodes (interdigital transducers, IDT) generate nanoscale soundwaves (surface acoustic waves, SAWs), which dynamically strain the waveguides. The nanoscale soundwave generated by the left IDT switches the colour of the emitted single photons. The two waveguides are coupled by two multimode interference beamsplitters (MMIs). The soundwave generated by the right IDT sorts the single photons according to their colour (red and green) between the two outputs on the right.

Dominik Bühler, who designed the quantum chips as part of his PhD at the University of Valencia, points out how fast the technology is: “By using nanoscale soundwaves, we are able to directly switch the photons on the chip back and forth between two outputs at unprecedented speed during their propagation in the waveguides.”

The researchers consider their results to be a milestone on the way towards hybrid quantum technologies as they combine three different quantum systems: quantum light sources in the form of quantum dots, the light quanta created, and phonons (the quantum particles in the soundwave). The hybrid quantum chips – designed at the University of Valencia and manufactured at the Paul Drude Institute of Solid-State Electronics using quantum dots produced at the Technical University of Munich – exceeded the expectations which the research team had.

Physicist Hubert Krenner, who heads the study in Münster and Augsburg said: “Our team has now succeeded in generating individual photons on a chip the size of a thumbnail and then controlling them with unprecedented precision, precisely clocked by means of soundwaves.”

Mauricio de Lima, who researches at the University of Valencia and coordinates the work being done there, adds, “The functional principle of our chip was known to us as regards conventional laser light, but now, using light quanta, we have succeeded in making the long wished-for breakthrough towards quantum technologies.”