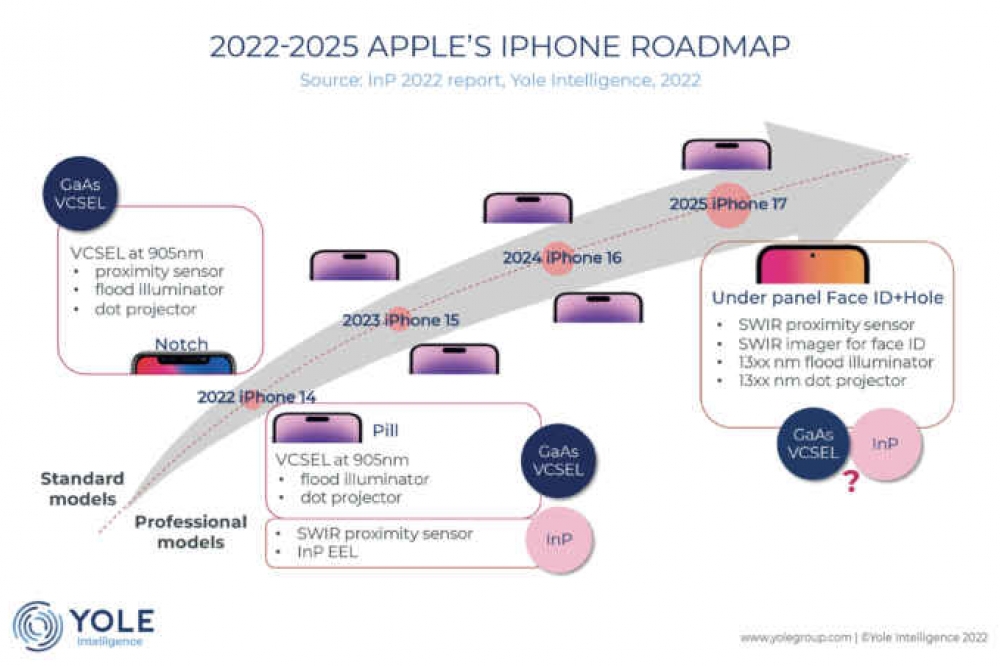 2022 marks the beginning of a shift into smartphones and beyond

The InP market has long been dominated by datacom and telecom applications, and as such is expected grow from $2.5 billion in 2021 to around $5.6 billion in 2027 driven by high-data-rate modules, above 400G, by big cloud services and national telecom operators requiring increased fibre-optic network capacity.

But, according to Yole Intelligence, consumer applications will be the next showcase for the InP industry, with a 37 percent CAGR between 2021 and 2027. “There has been a lot of speculation on the penetration of InP in consumer applications. The year 2022 marks the beginning of this adoption. For smartphones, OLED displays are transparent at wavelengths ranging from around 13xx to 15xxnm, ” said Ali Jaffal, technology and market analyst at Yole Intelligence.

OEMs are interested in removing the camera notch on mobile phone screens and integrating these 3D-sensing modules underneath the OLED displays. In this context, they are considering moving to InP EELs to replace the current GaAs VCSELs .However, such a move is not straightforward from cost and supply perspectives.

Yole Intelligence noted the first penetration of InP into wearable earbuds in 2021.Apple was the first OEM to deploy InP SWIR proximity sensors in its AirPods 3 family to help differentiate between skin and other surfaces. This has been extended to the iPhone 14 Pro family.

The leading smartphone player has also changed the aesthetics of its premium range of smartphones, the iPhone 14 Pro family, reducing the size of the notch at the top of the screen to a pill shape. To achieve this new front camera arrangement, some other sensors, such as the proximity sensor, had to be placed under the display.

Will InP penetration continue in other 3D sensing modules, such as dot projectors and flood illuminators? Or could GaAs technology come back again with a different solution for long-wavelength lasers?

The impact of an innovative company like Apple adding such a differentiator to its product significantly affects companies in its supply chain, and vice versa.

Traditional GaAs suppliers for Apple’s proximity sensors could switch from GaAs to InP platforms since both materials could share similar front-end processing tools. Yole Intelligence certainly expects to see new players entering the InP business as the consumer market represents high volume potential. In addition, Apple’s move could trigger the penetration of InP into other consumer applications, such as smartwatches and automotive LiDAR with silicon photonics platforms.