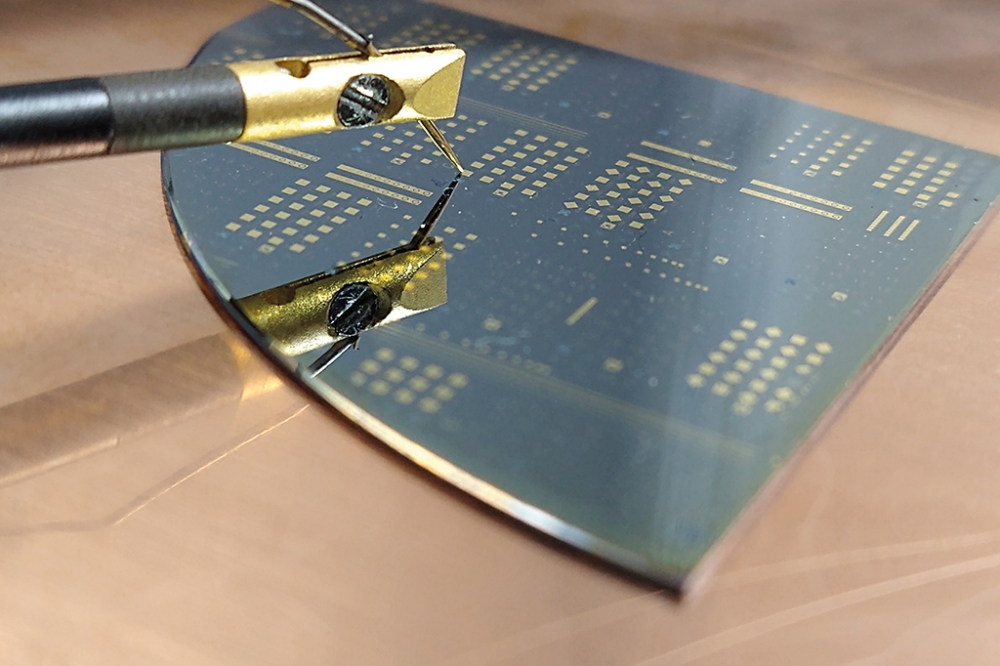 The photonic crystal, surface-emitting lasers combines a low cost with high speed and plenty of power BY RICHARD HOGG AND DAVID CHILDS FROM VECTOR PHOTONICS

Semiconductor lasers are revolutionising our lives. These tiny emitters are now critical components in data communications; additive manufacturing, including metal and plastic printing; LiDAR; and optical sensing - these are the fastest growing technology markets in the world right now.

Helping to drive deployment in all these sectors is our team at Vector Photonics. Formed last year as a spin-out from one of the world's leading photonic groups based at the University of Glasgow, we have invented the PCSEL, short for the Photonic Crystal Surface-Emitting Laser. This novel device, employing proprietary technology, is the first major breakthrough in semiconductor lasers since the commercialisation of the VCSEL in the 1990s. The PCSEL's greatest asset is that it combines a low cost with high speed and plenty of power. All other laser technologies fall short in this regard, offering no more than two of these three key characteristics.

As well as excelling on all those fronts, the PCSEL provides additional advantages. Like a VCSEL, it emits light from its top surface, making this laser easy to package and incorporate into a PCB or electronic assembly. However, its manufacture is similar to that of an edge-emitting laser, allowing production to draw on existing supply chain capability and capacity. And last but by no means least, the PCSEL spans a vast spectral range, equipping it with the potential to address a wide range of applications.

To drive the adoption of the PCSEL, we are continuing to develop and improve manufacturing techniques for this class of laser. These efforts will help to broaden the PCSEL's range of applications. Our initial focus is on the datacom market, where this new class of laser appears to be the only technology capable of meeting the requirements for next-generation, high-data-rate lasers. However, we are also starting to investigate plastic and metal printing applications, and it will not be long before we will also consider opportunities associated with mobile consumer and sensing applications.

The PCSEL marries the best features of the edge-emitting laser, whether that be a Fabry-Perot design (top left) or one that features a grating (top right), with the VCSEL (bottom left). Merits of the PCSEL include high powers, high speed and low costs.

To fully appreciate the merits of our invention, it is crucial to understand the production process of the established rivals, and how they operate.

The edge-emitting laser is capable of high-speeds and plenty of power, but it is expensive to make. In its simplest form - that is, the Fabry-Pérot laser, the original semiconductor laser technology - laser feedback and emission are both in-plane, causing light to exit the end of the laser, with gain reflection coming from facet mirrors. A variant of this design is the distributed feedback laser; it also features in-plane feedback and emission, but this time gain reflection comes from a grating structure.

The VCSEL has a radically different architecture, with mirrors above and below the active region providing out-of-plane gain and emission. Thanks to this, it is much cheaper to test and package this class of laser than an edge emitter.

The mirrors of the VCSEL are formed from Bragg reflectors, created by growing alternating layers with different refractive indices. Increasing the number of these layers, which each have a thickness equating to a quarter of the emission wavelength, bolsters reflectivity. To ensure optimal VCSEL performance, reflectivity of the Bragg stack needs to be in excess of 99 percent.

Increasing the emission wavelength of the VCSEL is not easy. There is more to it than simply increasing the thickness of every layer within the Bragg stack. At longer wavelengths, the two materials used to form this structure tend to have a smaller difference in refractive index, so more periods are needed to ensure sufficient reflectivity. As well as increasing epitaxial growth times and cost, thicker stacks increase the resistance of the laser, and ultimately limit its output power.

With these manufacturing challenges at play, it is not surprising that the VCSEL has a limited range of operational wavelengths. Note that for InP, the material associated datacoms and telecoms wavelengths, there are no suitable pairs of lattice-matched compounds with a high index contrast.

The PCSEL does not suffer the same fate as it can be made from any direct bandgap semiconductor material system. What's more, it enjoys the best of both worlds, combining in-plane feedback with out-of-plane surface emission, while benefiting from cheap test and packaging, just like a VCSEL.

An additional strength of the PCSEL over the VCSEL - and also any edge-emitter with a facet coating, such as that employed in a distributed feedback laser - is that it has a two-dimensional grating that is easy to scale. Compared to the VCSEL, the PCSEL also has other virtues: it has low contact resistance, ensuring the highest power output of any laser, size for size; and unlike a VCSEL, it does not contain an oxide aperture, so its production does not require specialist oxidation furnaces. And yet another merit is that its output is single mode, so scales up proportionally with area, due to the two-dimensional design and in-plane feedback.

Targeting datacom and telecom
Due to the absence of the InP VCSEL, edge-emitting cousin serves this market. They provide emission at 1310 nm and 1550 nm, the wavelengths offering optimal transmission for datacom and telecom, respectively.

Datacom networks use sources at 1310 nm, a wavelength that provides minimal dispersion in a single-mode fibre-optic cable. Minimising dispersion ensures that when transmitting a pulse of light through a fibre, it arrives at its destination at mostly the same time and relatively intact. This state of affairs is highly valued, because an intrinsically low dispersion during transmission diminishes demand for the coherence of the semiconductor laser. Incidentally, there's no free lunch - the price to pay is greater attenuation in the cable, restricting the use of 1310 nm lasers to the relatively short distances used on datacoms applications. With the PCSEL, thanks to it high output powers, the transmission distances are not as short as they are for edge-emitting lasers.

Due to the far longer transmission distances for telecom - light might propagate 200 km before reamplification - the lasers that are employed emit at 1550 nm, where loss in the fibre optic cable is at its minimum. The tarde-off is greater dispersion, so a laser needs to have a high degree of coherence to ensure good system receiver performance. The good news is that the PCSEL excels in this regard.

Another critical yardstick for any laser used to transmit information is its data rate. Regardless of the emission wavelength, the data rate is governed by the mode volume of the laser. Decrease the size of the chip and data rates rise. Edge-emitting lasers have a small mode height, but this is compromised by the large mode length. VCSELs are the opposite, having a small mode length, but a comparatively large mode height, because the mode penetrates into the Bragg stack. Due to this, although the VCSEL can realise high speeds, its limited single-mode performance makes it unsuitable for high-speed datacoms and long-distance telecoms. The VCSEL's characteristics are also a concern in sensing applications, restricting the use of this technique to relatively short distances.

Breaking the shackles is the PCSEL, which combines the mode width and length of the VCSEL with the mode height of an edge-emitting laser. Thanks to good mode confinement in all three directions, a PCSEL can be up to two-and-a-half times faster than a VCSEL with an equivalent emission area, and more than three times faster than a high-speed, edge-emitting laser (see Table 1).

Multiple opportunities
Another attribute of the PCSEL architecture is that it allows the fabrication of coherently coupled arrays, opening the door to several other opportunities. To produce this form of light source, laser elements of the array are joined by a coupler region. This links the in-plane light between laser elements, creating coherence. Using lenses, this coherent emission can be focused down to a small spot with a greater power density, an asset for cutting, welding, melting, engraving and drying applications.

As the laser elements of the array are coupled in plane, in an ‘n x n' array, there is an obvious path to power scaling. The PCSEL realises high brightness, and thanks to its unique geometry, it can deliver kilowatts of coherent power. This is an accomplishment that cannot be replicated with other laser technologies.

Arrays also provide other valuable characteristics. By electronically tuning the phase of the coupler region to create an optical phased array, the beam produced by the laser can be steered, in real time, without moving parts. This attribute makes the PCSEL applicable to rapidly evolving LiDAR applications, which require steering of the beam for imaging. Other applications that could be revolutionised by the PCSEL include 3D printing in metal and plastic. Today these applications are served by systems involving a high degree of mechanisation. Switch to a solid-state solution based on a PSCEL and system size could shrink by a factor of ten while increasing reliability.

With the attributes that will allow it to serve in numerous applications, there is no doubt that the PCSEL is going to revolutionise semiconductor laser technology. Offering a great set of cherished attributes - it has a lower cost, greater speed and a higher, coherent power than all other current semiconductor laser platforms - its future is for the taking.

Table 1. The small mode volume for the PCSEL allow this class of laser to operate at high data rates than edge-emitting lasers and VCSELs.