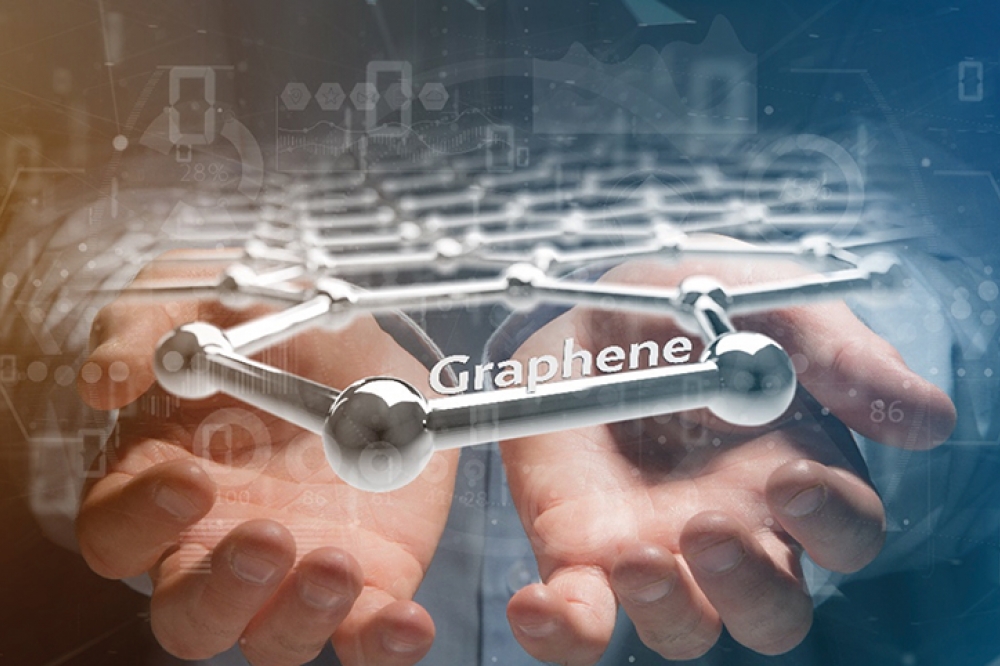 The possibilities of incorporating the unique electrical, physical and photonic properties of graphene into photonic integrated circuits has appealed to PIC developers since harvesting the 2D material was shown possible by two Russian physicists in 2004. Those physicists, Andre Geim and Kostya Novoselov, won the Nobel Prize in 2010 for their work with graphene. EPIC reports on advances being made to bring the potential of graphene into production across Europe and the UK. Ivan Nikitskiy, Photonics Technology Expert, European Photonics Industry Consortium (EPIC)

With its unique optical and electrical properties, strength, lightness, and thinness, graphene is seen as an ideal material to produce the next-generation of faster and more efficient electronic and photonic devices required to support the exponential growth in global data traffic for datacom and 5G industries.

In this article, we look at the development and commercialization of graphene optoelectronics in Europe and the challenges that need to be addressed to realize the large-scale integration of graphene into photonic integrated circuits.

Graphene is the name given to a flat monolayer of carbon atoms or a two-dimensional (2D) form of graphite with a honeycomb lattice structure. Although the theoretical study of atomically thin carbon structures started almost 100 years ago, atomic monolayer materials have been known only as an integral part of larger 3D structures, usually grown epitaxially on top of monocrystals with matching crystal lattices. 2D materials were presumed not to exist in the free state, being described as purely academic models. However, in 2004, these academic models were suddenly turned into reality, when free-standing graphene was unexpectedly discovered by two Russian physicists, Andre Geim and Kostya Novoselov, who were the first to study its unique material properties experimentally, along with demonstrating the possibility to obtain a variety of other materials in their free-standing 2D form. In 2010 they were awarded the Nobel prize in physics, and the rise of graphene had begun1.

Pure graphene is the thinnest, lightest, and strongest material yet discovered that is also flexible, almost transparent, and possesses ultra-high electrical and thermal conductivity. For this reason, graphene was heralded as a wonder material for applications in composites and coatings, transparent and flexible electronics, solar panels and batteries, drug delivery and DNA sequencing. But above all, the exceptional photonic properties of graphene make it ideal for ultrafast optical and data communication components, enabling ultrahigh spatial bandwidth density and low power consumption board connectivity and connectivity between data centres. Furthermore, the ultimate thinness of graphene facilitates its compatibility with modern silicon-based optoelectronics and suggests itself as the platform for the next generation of Photonic Integrated Circuits (PICs)2.

EU initiatives
Discovered in Europe, graphene quickly became one of Europe's priorities in lab-to-fab technology transfer and recognizing the material's potential, in 2013, the European Commission set up the GRAPHENE FLAGSHIP project. With funding of
€1 billion over 10 years, Flagship's mission was to take graphene and related layered materials, from the laboratory to industry with the aim of revolutionizing multiple industries and creating economic growth and new jobs in Europe.

2D-EPL: The Flagship's most recent initiative has been the launch of the Two-Dimensional materials Experimental Pilot Line (2D-EPL) to integrate graphene and Graphene Related Materials (GRM) in semiconductor platforms. Here, it needs to be pointed out that, in recent years, a large variety of other 2D materials were obtained using scalable synthesis methods with electronic properties ranging from semimetals, direct- and indirect-bandgap semiconductors, to superconductors.

Accordingly, 2D-EPL‘s mission is to bridge the gap between lab-scale manufacturing and large volume production of optoelectronic devices based on graphene and GRM. Starting in 2020, with funding of €20 million, the 4-year project aims to establish a European ecosystem for prototype production of 2D-based electronics, photonics, and sensors.

The project is built on two pillars: one, offering prototyping services in the form of Multi-Project Wafer runs as well as tailor-designed integrations for 150 mm and 200 mm wafers; and the other, the development of a fully automated process flow on 200 mm and 300 mm wafers, including the growth and transfer of high crystal quality graphene and GRM. With 11 partners, covering the whole value chain, including tool manufacturers, chemical and material providers, and research foundries, 2D-EPL is providing prototyping services not only to the core Graphene Flagship project but also to external partners.

METROGRAPH: As part of their Spearhead Projects. i.e., industry-led initiatives aimed to increase the Technology Readiness Level (TRL) of graphene-based technologies, in 2020, the Graphene Flagship launched METROGRAPH to develop a graphene-enabled optical transceiver. In view of the rapidly growing market for PICs and the associated need for integration in high bandwidth communications, the aim of the project is to develop a wavelength agnostic, coherent optical transmitter and receiver based on graphene photonic chips for low-cost, high bandwidth communications. The device will operate at 200 Gb/s in the conventional band and long-wavelength band, covering the 1530-1625 nm wavelength range. The graphene-based photonic circuits will be packaged and tested both in the lab and in a network line card with a TRL of 8, together with a state-of-the-art digital signal processor. Their functionality will be demonstrated in equipment for metro and metro-regional distances of 200 to 1000 kilometers.

R&D: The largest European research center working with the Graphene Flagship is the Belgium-based Interuniversity Microelectronics Centre (IMEC), an international research & development organization, active in the fields of nanoelectronics and digital technologies. Together with National Interuniversity Consortium for Telecommunications (CNIT) in Italy, IMEC develops the work package on wafer-scale integration. This work package targets the transition from laboratory to wafer-based fabrication technology. As Cedric Huyghebaert, program manager of exploratory materials and modules at IMEC and the 2D-EPL division leader, explains: “Many graphene-based concepts have been successfully demonstrated. But most of the demonstrations are limited to the lab and use graphene in the form of small, exfoliated flakes. The real challenge is to mature these concepts from flake-based devices towards real marketable products. And this requires the integration of the material at the wafer scale, in a real production environment”.

Another research organization participating in the Graphene Flagship is AMO GmbH, a non-profit research-oriented nanotechnology SME located in Aachen, Germany, that provides a range of services from consulting to prototype development. With a 400 sqm state-of-the-art cleanroom, AMO's mission is to efficiently close the gap between university research and industrial application. In recent years, the company has become a global player in 2D materials research for electronics and photonics. In the framework of the 2D-EPL project, AMO will provide two multi-project wafer (MPW) runs where universities, research institutes, and companies can include their designs as dies on joint wafers.

Industry of graphene wafer-scale production
Headquartered in Germany, AIXTRON is one of the world's leading suppliers of deposition equipment to the semiconductor industry and is a key partner of the 2D-EPL initiative. As one of the tool manufacturers, AIXTRON is responsible for developing the growth and transfer tools, as well as processes necessary for graphene and GRM production. AIXTRON has developed a Metal-Organic Chemical Vapor Deposition (MOCVD) reactor for the growth of graphene and GRM directly onto large substrates - up to 300 mm - using its proprietary Close Coupled Showerhead® technology. Direct growth allows industrial-grade 2D materials and their associated heterostructures to be grown insitu for front-end applications. For effective back-end integration, AIXTRON is investigating novel processes as well as developing an automated transfer system of 2D material structures onto device wafers. These platforms will provide key capabilities for the pilot line in realizing large-scale integration of graphene and GRM into logic, memory, photonic, and sensor devices.

Spanish Graphenea is a graphene producer serving just over 800 customers in 55 countries. Its portfolio of products consists of graphene films produced by wafer-scale Chemical Vapor Deposition (CVD), graphene oxides, chips with graphene field-effect-transistors, and graphene foundry services. Around 65% of Graphenea's activities are related to medical biosensors, the other 35% to photonics devices such as photosensors and optical switches. Graphenea's most important products are foundry services that follow a pure-play model based on a vertical integration scheme. This enables the graphene to be grown, transferred, and processed under the same roof, which allows the manufacturing process to be continuously monitored and the delivery of high-quality, reliable graphene-based devices, tailored to the customer's needs.

Founded in 2012 in the Netherlands, Applied NanoLayers (ANL) is a high-volume foundry and producer of GRM sheets with a low defect density such as hexagonal boron nitride for BEOL silicon integration. As ANL points out, CVD growth of graphene is the only technique that can compete with exfoliation when it comes to the electronic properties of graphene, and their advanced CVD systems enable optimum film morphology for wafers from 50 to 200 mm in diameter. Additionally, CVD scales to industrial high-volume wafer-scale series production, where the quality of each graphene sheet can be continuously controlled. Their wafer-scale cold film transfer of 2D materials including graphene and hexagonal boron nitride enables integration with existing substrates such as Si, GaAs, and InP.