'Annual global IP traffic will reach 3.3 Zbyte per year by 2021' This forecast recently published by Cisco [1] looks like a huge market for transmitters, and receivers alike. On a closer inspection, however, optical component makers may get less excited. Thanks (or owing) to fantastic achievements on the high-speed performance of key components in recent years, single transmitter devices of fairly manageable design are capable today of delivering a modulation rate on the order of 50 Gb/s -100 Gb/s, and even beyond that when using more complex configurations.

Typical performance parameters of HHI's EML devices, featuring a 300 Âµm long DFB laser and an 80"¦120 Âµm long EAM section, are characterized by a static extinction ratio of > 20 dB at an EAM voltage swing of 2 V. A typical bias voltage is about -1 V, and below this point the chirp factor tends to become zero, and even negative when further shifting the bias towards larger negative values. The optical output power reaches some 5 dBm, generally limited by the fact that the DFB laser is not operated at optimum gain but is detuned to longer wavelengths to guarantee transparency of the electro-absorption modulator in the on-state. 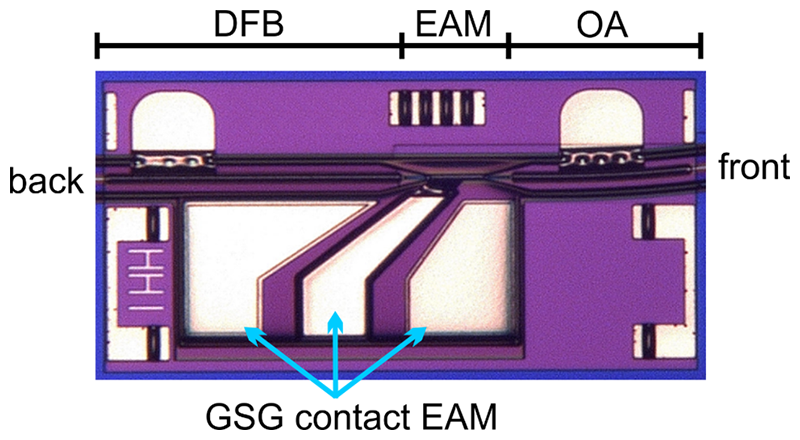 
Thanks to this upgrade, next-generation PON requirements (average modulated output power of min 9 dBm @10 Gb/s; 1577 nm) can readily be met. The modulation rate of 56 GBd is routinely achievable now. However, a baud rate of 100 GBd has been demonstrated very recently (Fig. 2) after introducing further design refinements.


Hence, a single-wavelength 100 G transmitter (on-off keying) may be implemented using a single tiny EML chip, provided suitable electrical drivers are available. In addition or instead, however, virtually all the common multiplex methods are applicable to efficiently accomplish even higher data rates and/or to exploit lower baud rates. 4- and 8-level Pulsed Amplitude Modulation (PAM) was successfully demonstrated on HHI's EMLs. Using a proprietary SiGe based driver IC, clear 32 GBd PAM4 eye diagrams have been achieved at a driver power of 84 mW leading to a figure-of-merit of 1.3 pJ/bit (Fig. 3). 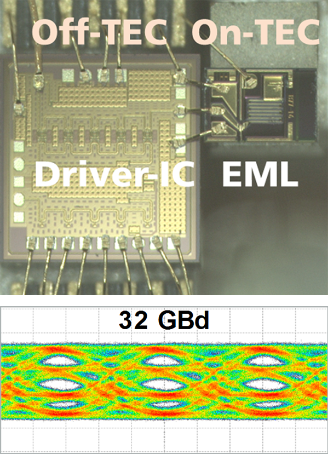 
For space-division-multiplexed transmission, a serial dual-EML chip has been designed that comprises two EAMs in back-to-back configuration sharing the same DFB source laser between them [5]. Simultaneous modulation without mutual interference was demonstrated at 56 GBd (Fig. 4).


For PAM4 schemes, a parallel 4-EML array was fabricated [6] which is capable of delivering an aggregated data rate of 224 Gb/s (4x 56 GBd). As a special feature, in this array the RF connections to the EAMs have been routed to the rear edge of the chip thus providing uniform RF driving conditions and concurrently facilitating packaging. While EMLs are now commonly used under TEC controlled conditions, typically at 40-50Â°C heat-sink temperature, uncooled operation (xx-90Â°) has been demonstrated recently.

Finally, generation of polarization-multiplexed signals has been shown. To this end, a photonic integrated circuit combines two EAM elements serially integrated with combiner/splitter-free polarization converters [7] and a DFB laser, as sketched in Fig. 5.

Figure 5: Image of a fabricated integrated Dual-Polarization EML device, consisting of (from left to right): a monitor photodiode (MD), a DFB laser diode emitting TE polarized light, two polarization converters, and two EAMs. The first polarization converter (45Â° PR) rotates the polarization by 45Â°, and the first EAM modulates the 50% of the laser light that remains TE-polarized. The following converter (90Â° PR) rotates the signal by 90Â° thus interchanging the TE and TM fractions. The second EAM modulates the light that was previously not modulated by the first EAM. The device was realized on HHI's PIC foundry platform.


Respective chips have been fabricated on HHI's generic PIC platform [8], and its functionality was successfully tested at 20 Gb/s per polarization state [9]. Such a chip measures only 3.2 mm x 0.2 mm. On a precursor chip without integrated laser, a total bit rate of 112 Gb/s was obtained using a baud rate of 28 GBd and PAM4 modulation [10]. By further inserting a phase shifter to modulate the optical phase between the TE- and TM-signal, a very compact transmitter for true 3-dimensional Stokes-vector modulation (SVM) could easily be implemented, delivering a bit rate corresponding to the threefold baud rate, and sixfold if additionally applying PAM4 signaling to each of the three channels. SVM represents a promising new direct modulate-and-detect technique, with a complexity and performance somewhere between direct and coherent transmission. This may have high potential for 100G access and metro networks "“to make room for some more zettabytes to come.

An alternative to electro-absorption modulators is the Mach-Zehnder modulator (MZM). MZMs exploit the quantum"“confined Stark effect which is quite efficient in InP based materials, particularly when using MQW structures. In comparison to EAMs, MZM devices build much longer (4"¦ 8 mm). This is rewarded by higher static extinction ratios (> 25 dB), operation over a wider wavelength span (~ 50 nm), and eventually probably higher electro-optic bandwidth.

As with EMLs, there is long-standing experience and expertise with Mach-Zehnder modulators on InP at Fraunhofer HHI. Already in an early development stage, a traveling-wave electrode design has been introduced to boost the bandwidth. Meanwhile, a wide range of discrete as well as integrated modulator structures of high complexity (e. g. IQ modulators) have been developed. Some of them have been transferred into commercial products by partnering with companies. Among the more recent developments is an O-band MZM that has been monolithically integrated with a DFB laser. A key step further was the co-design of the electrical driver aimed at lowest power consumption. To this end, a 2-bit digital-to-analog converter was designed for optimum impedance matching. ICs were fabricated on a 0.13 Âµm SiGe BiCMOS foundry platform. Fig. 6 shows a transmitter subassembly combining this IC and the DFB-MZM PIC. Tested at 56 GBd, PAM4 modulation the overall power consumption including the laser, the modulator and the driver amounted to only 332 mW [11].

Figure 6: Co-packaged transmitter subassembly comprising the DFB-MZM chip, a 2-bit DAC driver and a load resistor. The unit was successfully tested at 56 GBd, PAM4 modulation requiring a total power consumption of only 332 mW