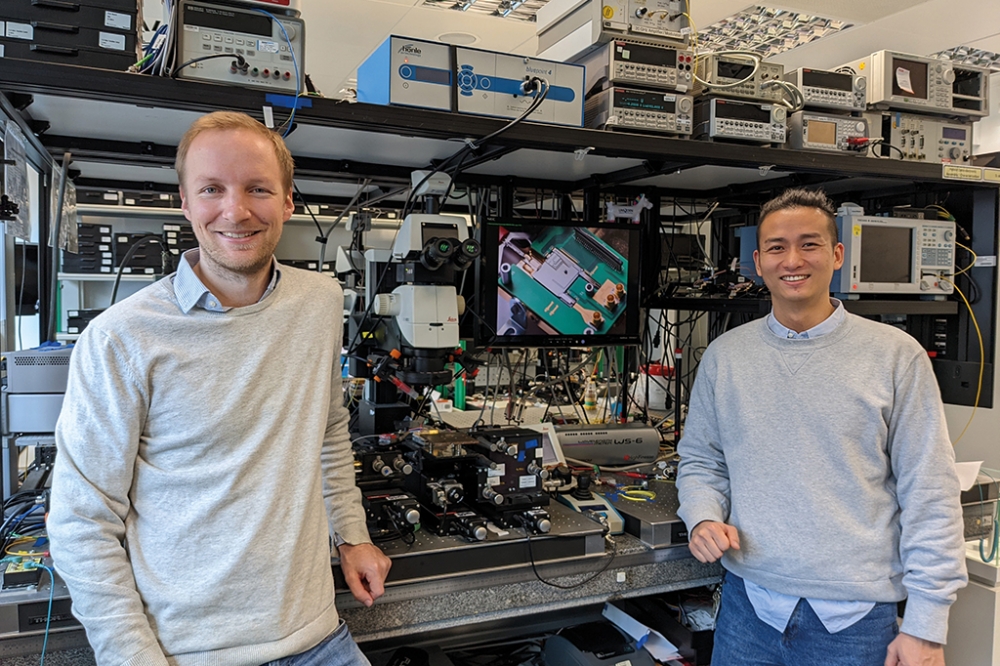 IN LATE 2018, the PIC magazine featured the PolyBoard, a polymer-based hybrid photonic integration platform developed at Fraunhofer HHI. This article described the first steps and concepts towards integrating optical isolators, circulators, and nonlinear crystals with the micro-optical bench. Moreover, ultra-widely tunable lasers and the possibilities of 3D photonic integration with vertical interconnects were introduced. Three years later, numerous advances within the further development of the PolyBoard were made.

This paper describes the progress made in the PolyBoard-implementation of integrated optical isolators and nonlinear crystals. Utilizing the wide transparency range of polymers, all functionalities of the PolyBoard can also be shifted towards lower wavelengths, even down into the visible. The second chapter of this article reviews tunable lasers at 1064 nm and 785 nm for applications beyond Telecom and Datacom.

Fig 1: (a) DBR laser with integrated isolator. The DBR laser consists
of an indium phosphide (InP) gain element, phase shifter (PS) and
Bragg-grating. The output of the micro-optical bench is coupled directly
to a single-mode fiber (SMF). (b) Demonstrated tuning of the laser
across a bandwidth of 17 nm. Different colors correspond to different
tuning currents of the Bragg grating. The laser is operated under 10%
back reflection.

The micro-optical bench
For optical isolators to work, they have to break the Lorentz reciprocity. In free-space optics, this is most often achieved with magneto-optic materials but the implementation of such materials in PICs is a challenging field of research. Especially when it comes to the integration with additional other optical components, for example lasers.

At OFC 2021, HHI presented the first tunable distributed bragg-reflector (DBR) laser with an integrated optical isolator based on the micro-optical bench [1]. The micro-optical bench is an on-chip free-space section consisting of two graded-index (GRIN) lenses coupled to polymer embedded waveguides with the help of precisely etched U-grooves. The first GRIN lens enlarges the beam diameter of the input waveguide and creates a collimated beam with low beam divergence. After the free-space section, the second GRIN lens couples the light back into the waveguide. This enables the low-loss integration of bulk elements, like free-space isolators, into the PolyBoard. The DBR laser protected by the isolator comprises an active indium phosphide gain section coupled to a polymer chip with a waveguide-inscribed tunable Bragg grating and a phase shifter. The fabricated device is depicted in Figure 1.


A maximum output power of 5.6 mW and a tunability of 17 nm was measured for this device. The excess loss added by the integrated isolator is only 1 dB, while it provides an optical isolation of 38 dB across the whole tuning range of the laser. The functionality of the PIC was tested during a 10 Gbit/s transmission across a 10 km fiber link with 10% of the laser power coupled back onto the chip as optical feedback. Even at these high levels of optical feedback, the isolator ensured a stable operation of the laser, while a coherence collapse appeared in a reference laser without optical isolator.

Besides optical isolators, the micro-optical bench enables the integration of any other materials. In [2], the integration of periodically poled nonlinear lithium niobate crystals for second-harmonic generation (SHG) was demonstrated by pumping it with a femtosecond pulse laser at 1550 nm, resulting in a conversion efficiency of 8 %. Figure 2 depicts the PIC used to create SHG together with the optical spectrum. Due to higher-order phase matching, not only the second but also the third and fourth harmonic at 517 nm and 388 nm are observable.

Besides SHG, nonlinear crystals are also useful to create photon pairs or entangled photons via spontaneous parametric down-conversion, targeting applications in quantum communications like quantum key distribution. Furthermore, the integration of nitrogen-vacancy-rich diamonds enables the development of sensitive magnetic field sensors. Both these applications are currently under investigation. Overall, the micro-optical bench is a key enabler for transferring quantum and non quantum lab experiments into photonic chips.

Tunable lasers at 1064 nm and 785 nm
Many applications beyond telecommunication require wavelengths well below 1300 nm. This is why we extended our hybrid laser concept to shorter wavelengths. By replacing the indium phosphide (InP) with gallium arsenide (GaAs) gain material, combined with the efficient thermo-optically tunable gratings on the PolyBoard platform, tunable laser designs at shorter wavelengths are also possible [3].